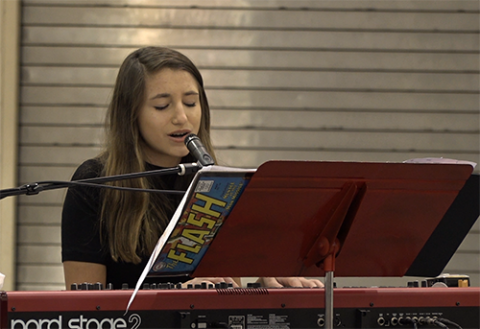 Lana performed several of her songs, including “Bring Them Home,” about refugees who find themselves making new homes in unfamiliar places. The song was inspired by her father, uncle and grandparents who journeyed to the United States as refugees from Lebanon. In spring 2018, Lana had entered the song in the national Creating on the Margins contest organized by the Catholic Campaign for Human Development to raise awareness of young migrants and refugees – and she won!

Watch her performance at the MANS conference .

Lana is scheduled to perform her award-winning song in front of a national audience at the National Conference on Catholic Youth Ministry in Tampa, Florida, this December.

Learn more about Lana’s contest-winning song at this link.

Learn more about Saint Thomas the Apostle Catholic School at this link.

Read Mlive's article about Lana winning the Creating on the Margins contest at this link.